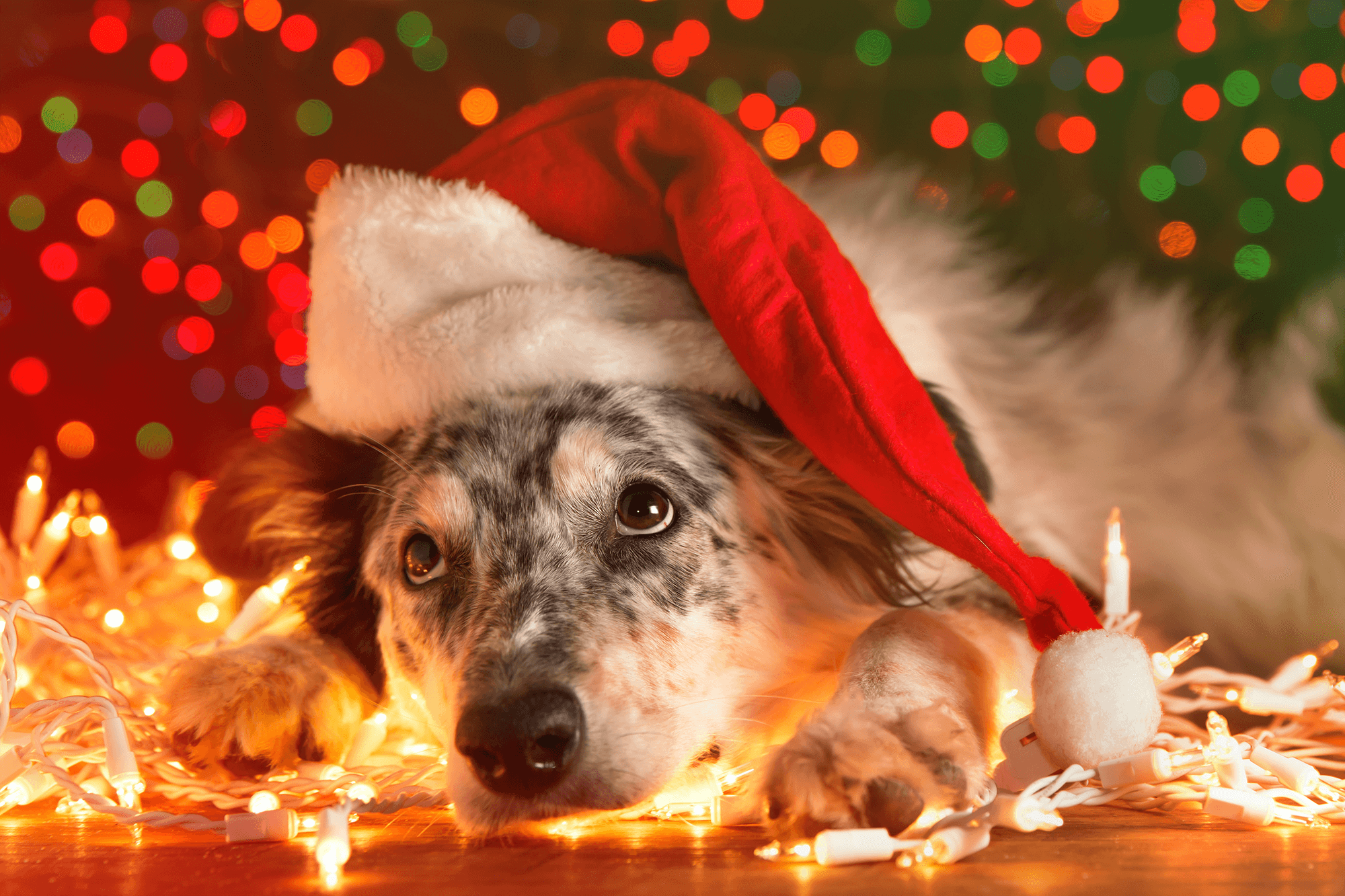 The dog that didn’t love Christmas

December is a time of tales: from the Nativity and traditional carols all the way to the modern Christmas movies made for tv. That’s why this Christmas, we’ll tell you the tale of Bailey, the dog that didn’t love Christmas. Could he have a change of heart? Read on to find out.

The late days of December is a magical time for many, but not to Bailey, because this dog does not like Christmas. Trouble always starts with the Christmas tree. On a random Sunday afternoon, early december, the Family will climb up to the attic together to return a little while later, carrying The Box. This box, Bailey knows from experience, contains a plastic tree. The Family always puts this tree right in the spot where his basket should be, and they hang all kinds of odd stuff in it. Bailey looks sadly at the spot that once housed his comfy basket. Where should he sleep now?

Then the Boy shouts: “Let’s go to the supermarket! We should buy those little mince pies!” As always, the Girl replies: “I hope they have those same dog biscuits, they’re so funny!”

“Gross”, thinks Bailey. Even thinking about those mealy brown things and their supposed ‘beef flavour’ makes him feel queasy.

Unfortunately for Bailey, His family is not the only one celebrating Christmas. The entire neighbourhood seems to be infected with this strange Christmas virus. Bailey’s normal rounds are no longer safe. Not only because of all the lights people have put up in their front gardens – you try peeing against a light-up reindeer! – but especially because of Tiger, the neighbours’ big bully of a cat. Tiger simply loves to hide behind a decorative Santa to freak Bailey out. He is a sly creature, so he chooses a different front yard every day, so Bailey never knows where he’ll pop up.

It happened again this morning. He was out for walkies with the Girl and she had just given Bailey one of the gross biscuits and he was carefully hiding it in his mouth. “We need to get to the grassy field stat, so I can bury this abomination!” Sadly, it wasn’t to be. They had barely left the street when Tige jumped out. “Aaaahh”, shouted Bailey, and he accidentally swallowed the biscuit. “Blasted cat!” he barked while the Girl dragged him away. “Come on, Bailey. He really startled you, didn’t he?” she said, trying to calm him down. “Here’s another biscuit for you”.

“I can’t wait for things to get back to normal”, Bailey grumbled to himself.

Christmas eve has arrived. Bailey has tucked himself away behind the aquarium, the only Christmas-free zone that’s left in the house. You can just see the tip of his peeping out. While he’s praying for Christmas to be over, so that the plastic tree will disappear and he’ll get his regular spot back, the Family exchanges gifts. Suddenly, Bailey hears them calling his name.
“Bailey! Santa has brought you something. Come and see!”

Carefully, he tiptoes from his hidey-hole. He’s never gotten anything from Santa before, except for those horrific biscuits.

He looks at the Family warily. There is a large package in the middle of the living room. “Look, Bailey”, says the Mum, and she rips the wrapping from the box. A large brown object appears. “A new basket!” exclaims the Mum. ‘Isn’t that kind of Santa? Come, Bailey. Come test your new basket.”

Still slightly suspicious, Bailey approaches the basket. Maybe one of those gross biscuits is hiding in it? Or perhaps Tiger will suddenly appear and scare the fur of his tail again? He is unsure. The Family encourages him: “Go lie down, Bailey, it’s okay.”

He sniffs. Nothing funky there. He extends a paw and feels the basket. “Hhhmm… soft”, he thinks. “Go on, Bailey”, the Family says again. “Come join us!”

Bailey decides to take a leap. “Well, then. That’s actually rather comfortable” The Dad says, “Give him a treat!”, but the Mum replies, “We’re out of those biscuits though.” Which further improves Bailey’s mood. “Give him one of those new chew bones, then. The one wrapped with chicken.”

While the Family watches a Christmas movie, Bailey is snug as a bug in his new comfy basket with a delish chew bone.

“Christmas really is the most wonderful time of the year!” he thinks to himself, contentedly.

Would you like to treat your pup to a delicious chew bone this Christmas? Check out our web shop! 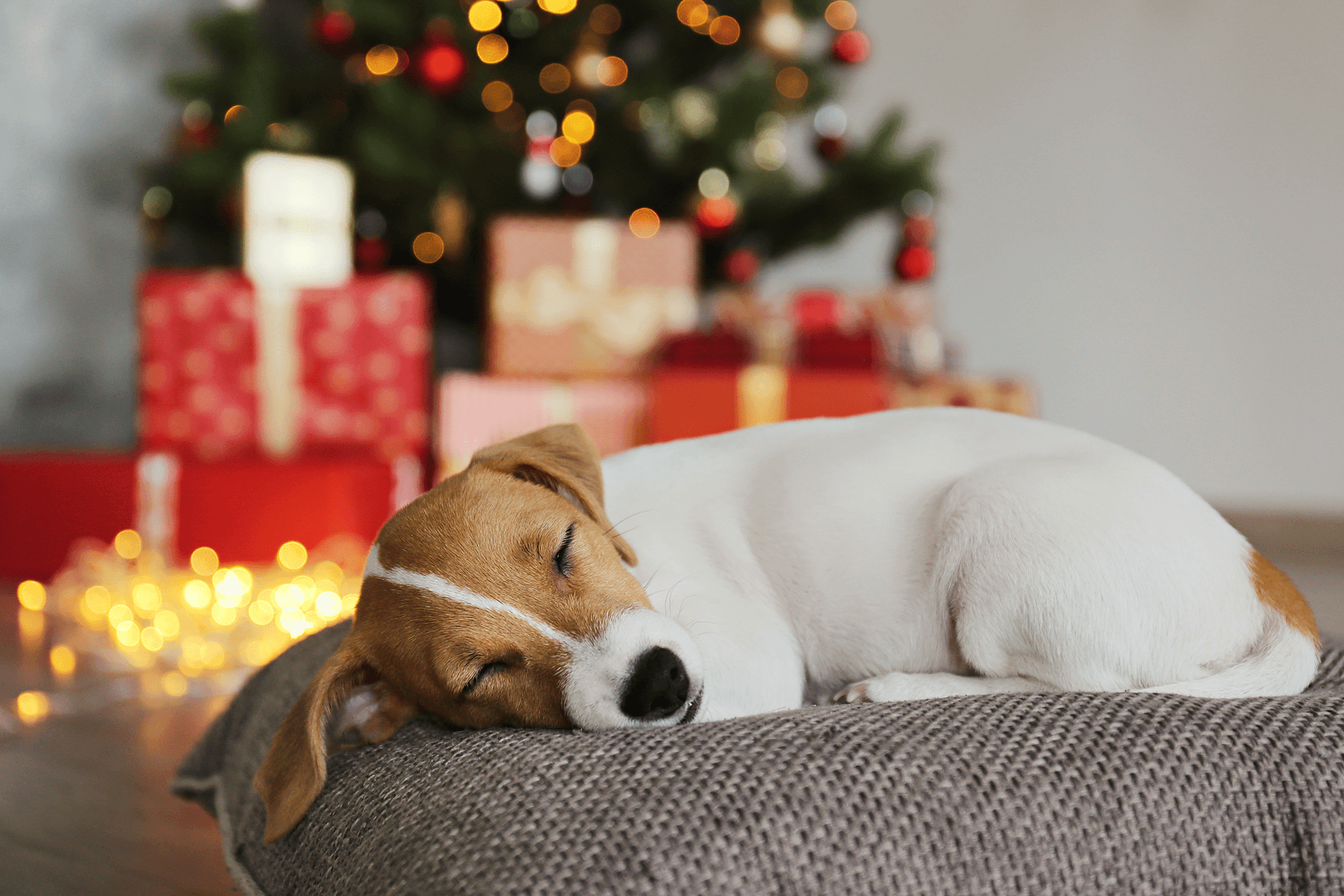 < Back to the news page